Putting the ‘connect’ in connectivity for remote students

By: Greg Thom | Education | Published on 12 November 2020
Share on Twitter Share on Facebook Share on LinkedIn
Aboriginal and Torres Strait Islander viewers are warned photographs on this website may contain images of deceased persons which may cause sadness or distress.
5-minute read
To help raise awareness about disaster preparedness and the benefits of connectivity, we recently visited students in remote Pormpuraaw for a special surprise. We share the experience with you this NAIDOC Week...

While nbn’s purpose – to lift the digital capability of Australia – is ably expressed in words, sometimes its real power is conveyed through moments as simple as the rapt smile on a child’s face.

The pair was there to help raise awareness about disaster preparedness by connecting schoolchildren in the Cape York peninsula community of Pormpuraaw in a live cross – via an nbn™ Sky Muster™ satellite-equipped Road Muster truck – with their student counterparts at Rocklea State School in far-away Brisbane. 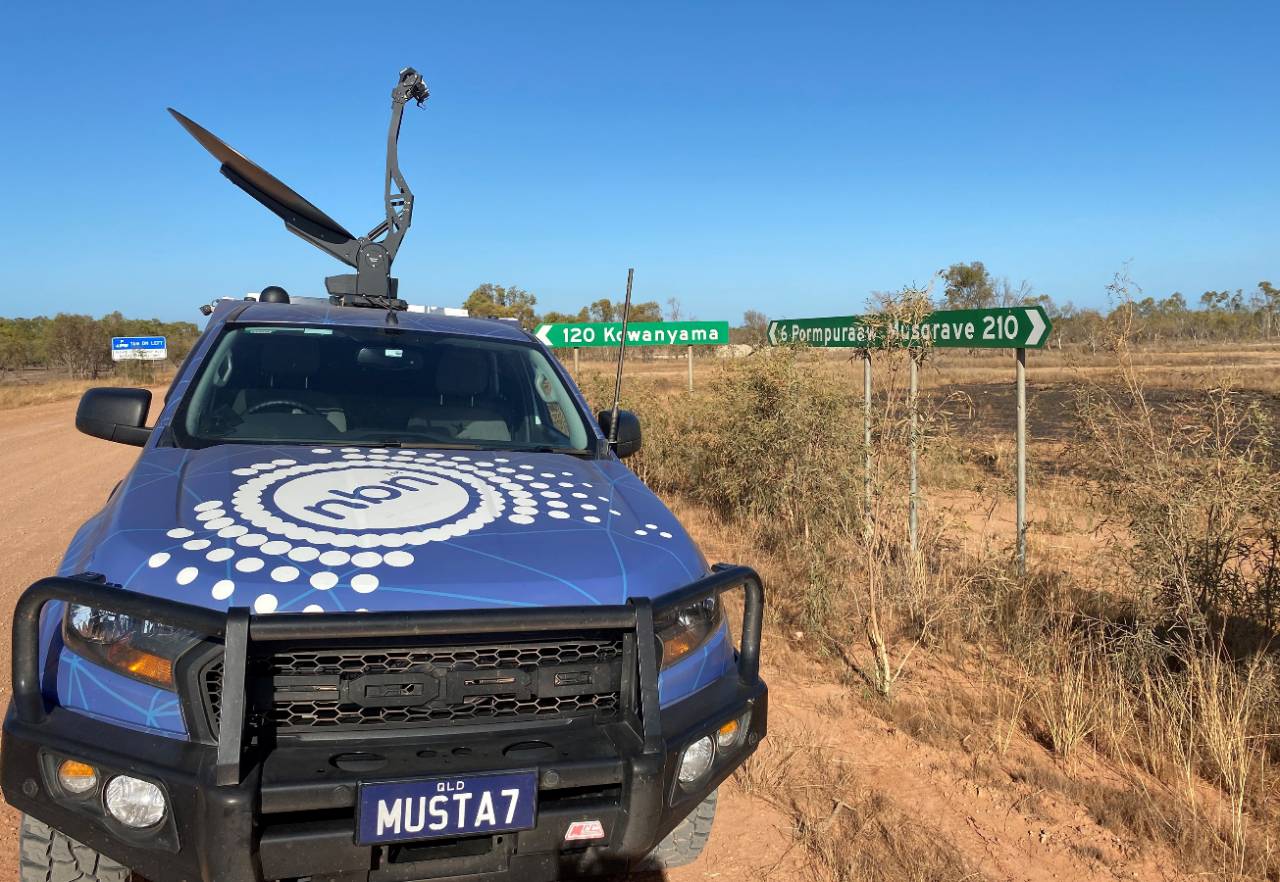 Though separated by more than 2,500 kilometres, the two communities share a common bond through their ability to come together in times of natural disaster.

Rocklea was heavily impacted by the 2011 Brisbane floods, while Pormpuraaw is not only one of the most remote communities in Queensland, it’s also one of the most disaster prone.

And, according to the Australian Digital Inclusion Index, it’s one of the nation’s most digitally disadvantaged.

When the faces of the Rocklea students appeared on screen in Pormpuraaw, says Melissa, the impact on the sea of children surrounding her was amazing to behold.

“It was honestly such a heart-warming moment to see their faces light up when they realised they were actually ‘live’.

“And that everyone, including former NRL legend and head of the JT Academy, Johnathan Thurston, could see them in Brisbane through the screen on the side of our Road Muster truck.

“It was extremely special.” 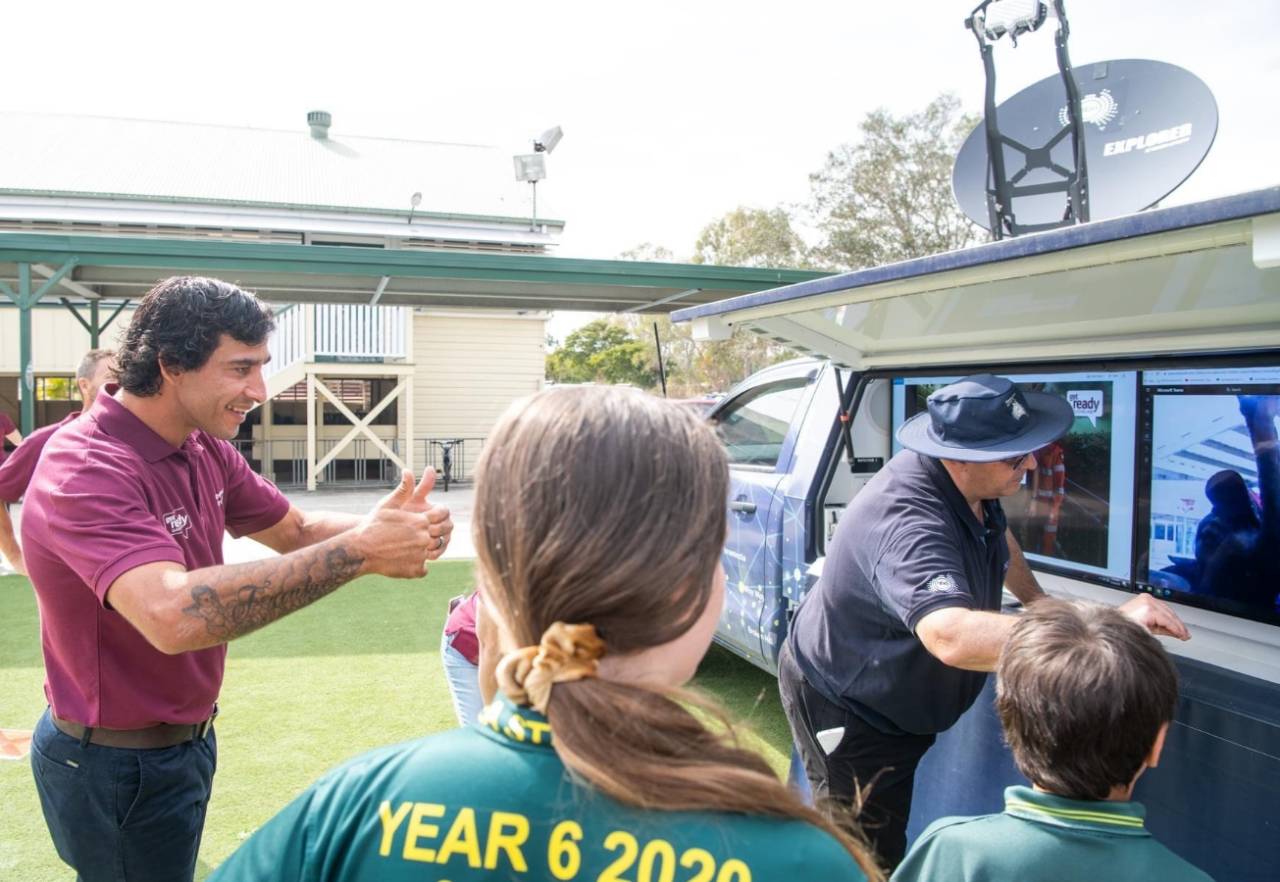 Melissa says the trip north was triggered by the opportunity to make a really special connection happen as part of the recent Get Ready Queensland Week launch.

Get Ready Queensland is a year-round program coordinated by the Queensland Reconstruction Authority (QRA) to help communities prepare for natural disasters.

“nbn is a Campaign Partner for the first time this year, teaming up with the QRA through nbn™ Local, and with friend of nbn and Get Ready Queensland Ambassador, Johnathan Thurston.”

Earlier this year, nbn worked closely with Johnathon and his JT Academy initiative to help connect remote communities impacted by the COVID-19 pandemic.

Formerly known as Edward River and with a population of 750, not only is this piece of paradise on the Cape York Peninsula one of the most disaster prone, it also attracted one of the lowest scores in the most recent Australian Digital Inclusion Index.

“That’s why it is particularly special to nbn,” says Melissa.

“We want to help understand this at a grassroots level, and work with the community on solutions to overcome the barriers around affordability and access to the internet.”

Translating words into actions, in July at the height of the COVID-19 lockdown, nbn installed a community Wi-Fi Sky Muster™ satellite service into the Pormpuraaw Library, helping locals to access vital health, education and government programs online – something nbn has repeated at other remote indigenous communities in Far North Queensland. 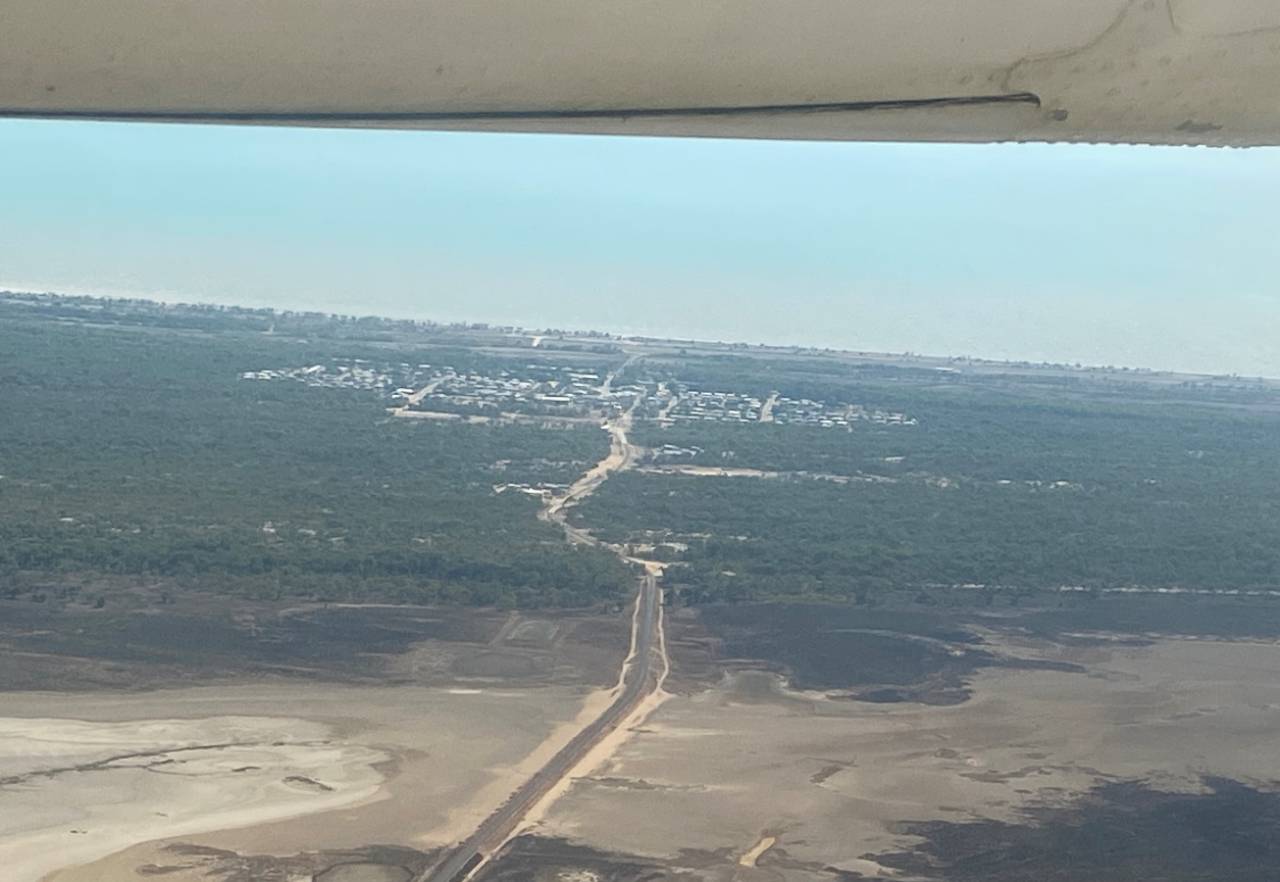 Pormpuraaw from the air.

The live cross event was a great way to show the power of the nbn™ network to help lift the community’s digital capability.

“The kids in Pormpuraaw were so engaged and so genuinely enthusiastic about learning more about the technology behind the connection,” says Melissa.

“Our Road Muster truck equipped with nbn™ Sky Muster™ satellite wowed them, and they even asked if they could keep it at their school!

“These types of engagements out in community really put the ‘connect’ in ‘connectivity’.

“They show these kids what is possible, what the internet enables them to do, and why there’s no reason for them to feel ‘left behind’ because they are so remote.” 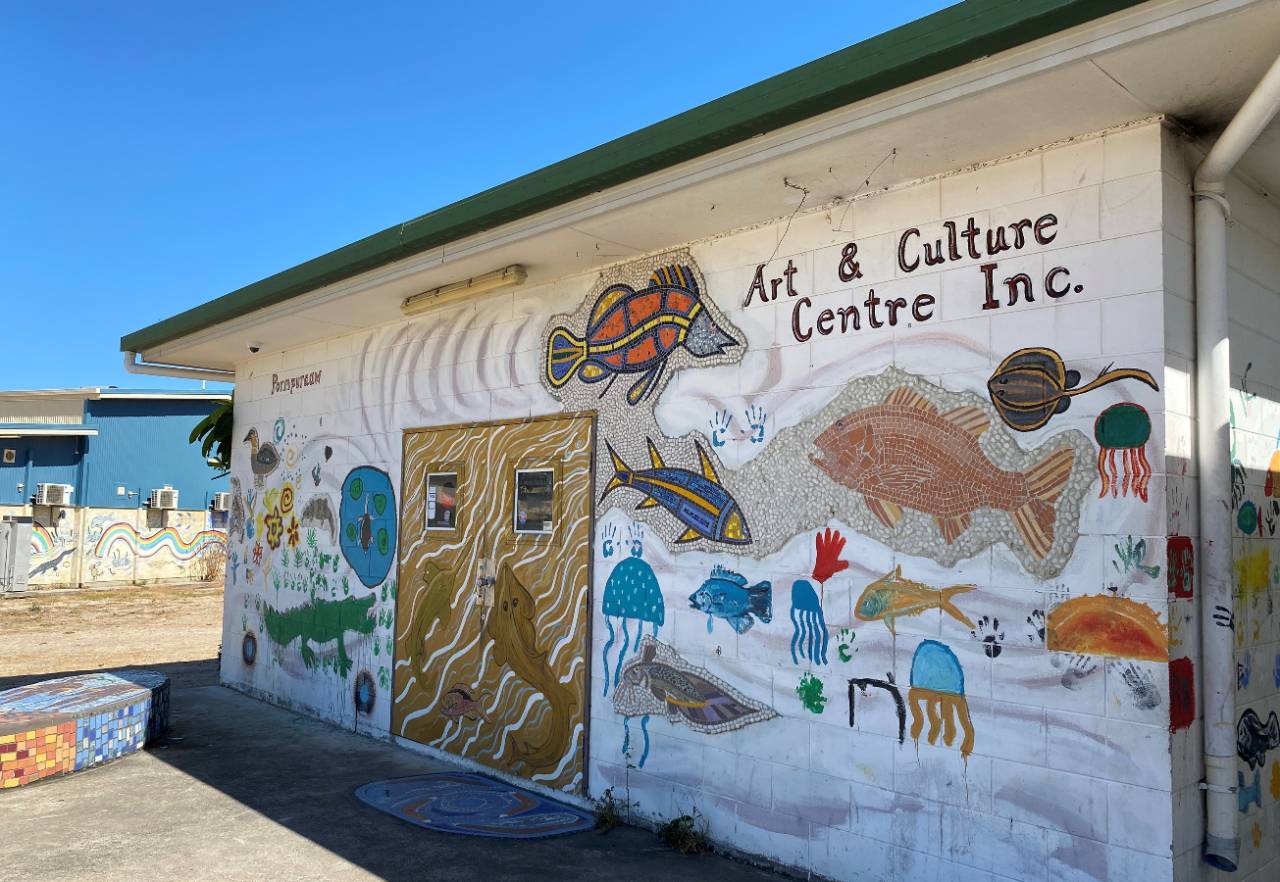 With the COVID 19 pandemic forcing the cancellation of many planned face-to-face events across Queensland to promote the Get Ready Queensland campaign, and to raise awareness of what happens to the nbn™ network in times of emergency or a natural disaster, the live cross was an important example of using that very connectivity to spread the disaster preparedness message.

“It was also a well-timed opportunity to get ‘boots back on the ground’ post-COVID in our vulnerable communities, and to introduce our Indigenous Affairs Lead, Che Cockatoo-Collins, in what was his first trip into the community with nbn,” says Melissa.

Not only were the kids delighted to have Che at their school assembly as he explained how the Road Muster truck ‘talks to space,’ his skills as a former Australian Football League (AFL) player were also in hot demand.

“The kids here are as mad about footy as they are about fishing,” says Melissa.

“We joined them for lunch and Che showed them he’s ‘still got it’ as they had a kick-to-kick of the Sherrin.” 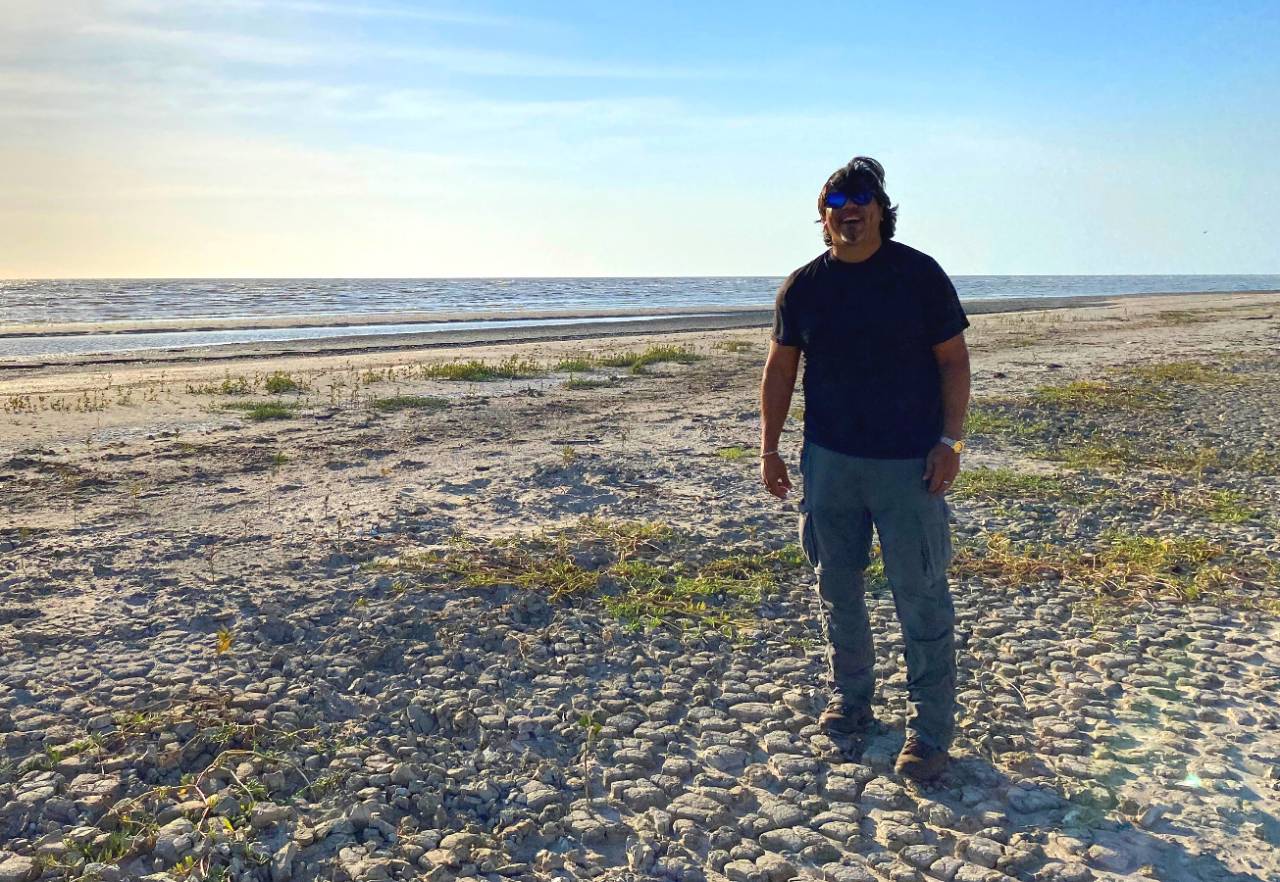 Che says being on the ground is a critical part of understanding first-hand what the challenges, barriers and gaps are in connectivity in community, and how nbn can be part of a community-led solution.

“We’ve been here to listen, to build relationships and connections, with the purpose of establishing trust with the community and I look forward to visiting more remote Aboriginal communities,” says Che.

“Kids in community will eventually be our next leaders, so it’s important we connect with them to build their digital capability, so they have a future ahead to be proud of.” 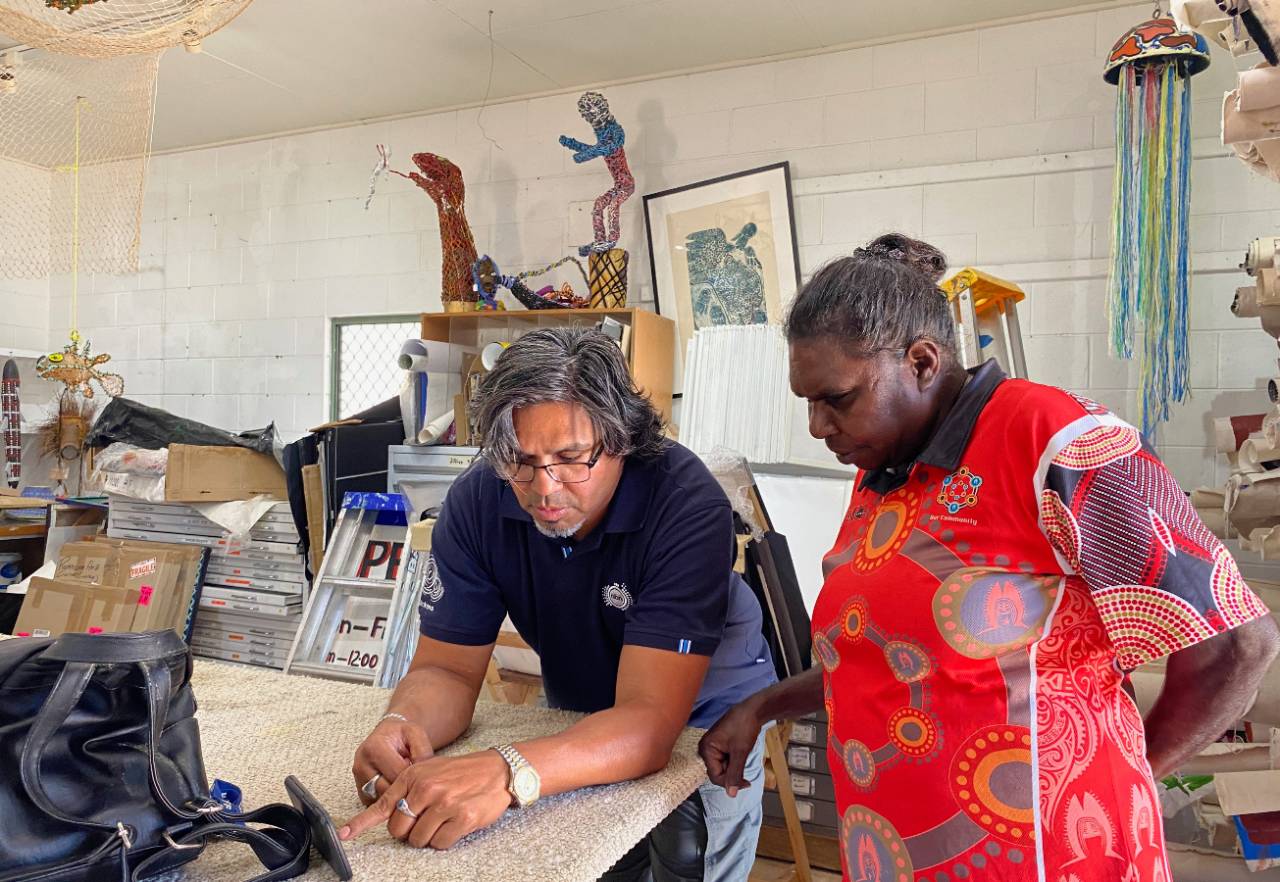 Pride is also something that comes to mind when Melissa reflects on her visit to Pormpuraaw and the infectious smiles of its youngest residents.

“It means so much to the kids to have visits like these and their excitement is infectious.

“We’ve not only visited their school and kicked the footy at lunchtime, but we’ve watched them fish and write our names in the sand as the sun went down. 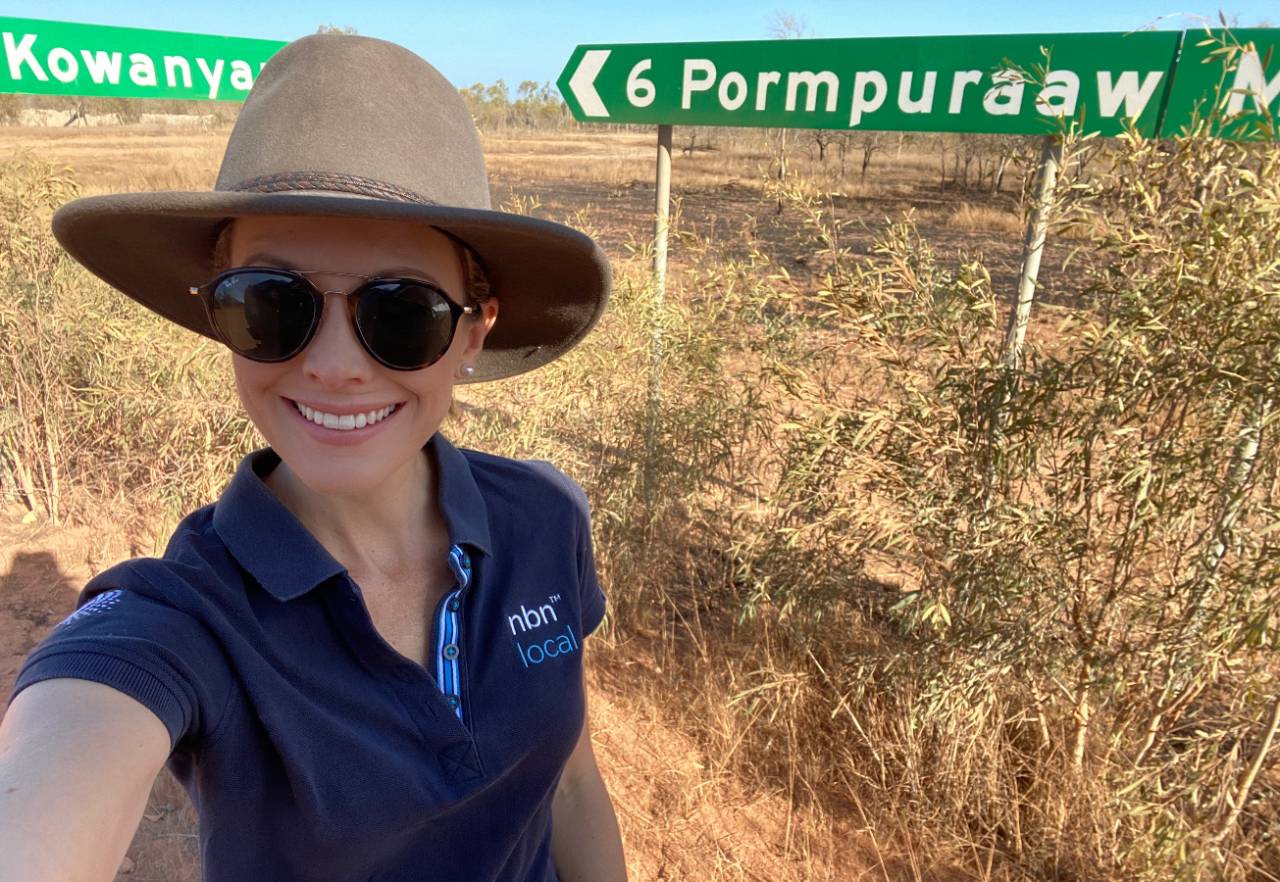 Melissa says the carefree youngsters of communities, such as Pormpuraaw, are the living embodiment of bringing nbn’s purpose of lifting the digital capability of Australia to life.

“They’re our leaders of the future and there’s nothing these kids can’t do.

“They’re resilient, they’re funny, they put life into perspective and, if we can bring the world to them through connectivity, then we’ll leave a legacy to be proud of.”

What is NAIDOC Week?

This year’s theme is Always Was, Always Will Be, recognising that First Peoples have “occupied and cared for this continent for over 65,000 years”.

Since the late 1960s, NAIDOC Week celebrations have included the iconic NAIDOC poster. Now a prestigious art competition, this year’s winning entry Shape of Land is by Perth artist and designer, Tyrown Waigana, a proud Noongar and Saibai Islander.

Discover NAIDOC events in your local area to get involved.

At nbn, our vision for reconciliation is to connect communities across Australia where Aboriginal and Torres Strait Islander Peoples share equal access in the benefits of the nbn™ network.

This year, we’re celebrating NAIDOC Week with COVIDSafe events and activities for our employees including First Peoples panel discussions, and the release of nbn’s fourth Reconciliation Action Plan. 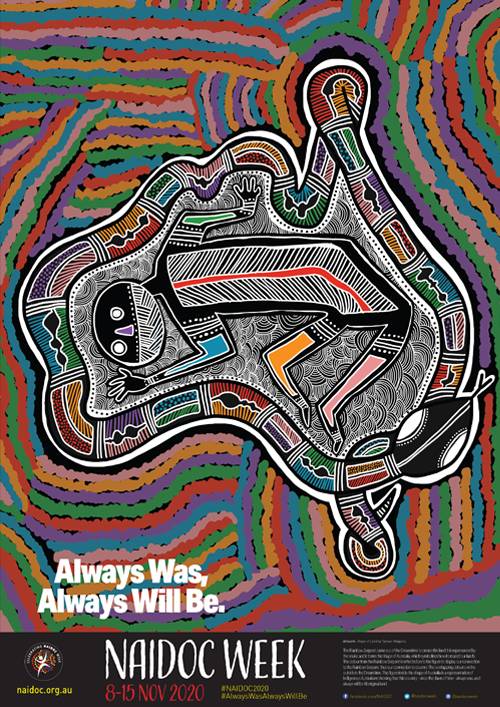 The 2020 National NAIDOC Poster, Shape of Land, by Tyrown Waigana.
Discover how communities in East Arnhem Land are benefiting from improved access to telehealth services and health outcomes with help from connectivity.