Skip to main content
Related Articles
How live streaming is changing what we watch How much data does streaming video, movies and TV use? (2018 edition) Movie and TV subscription services in Australia

Where does my stream come from and does it matter?

Thanks to increased access to fast internet, consumers across Australia are getting access video streaming services, but there is more to consider than just network speed.

There are many links in the long chain that connects your viewing device to a streaming service. Over the course of this article we’ll take you through some of the factors that may impact performance.

This will help you understand the reasons why you might face some issues, and allow you to better and more efficiently problem-solve them to raise the quality of your streaming experience. 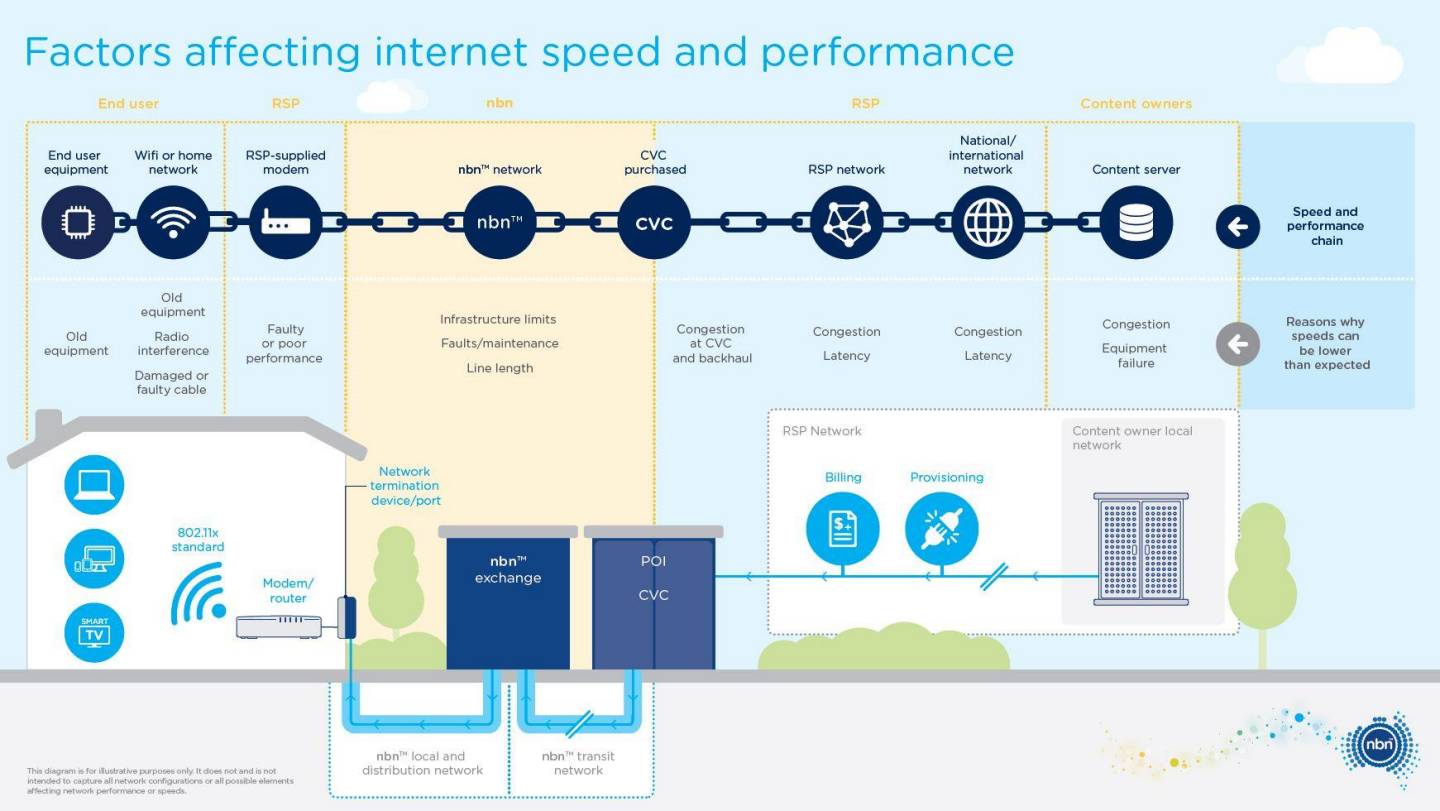 First, how does streaming work?

It’s easy to get confused about how streaming differs from traditional downloading. We have a detailed article that goes in-depth on how streaming works.

As a quick summation, both actions require you to ‘download’ the same, or similar, amount of data.

The difference is that a traditional download will generally require you to finish downloading the entire movie before you can start watching, where a stream brings all the little packets of information down in the correct order so that you can watch it as it downloads.

The streaming program (depending on how it’s designed) often deletes information as you watch it. After you pass a point in your movie, there’s a good chance it’s already been deleted by the time you’re on to the next scene, saving storage space on your device.

This is not the case with a traditional download, which often permanently stores information on whatever drive you’ve saved it to, so that you can access it again later without downloading it again. 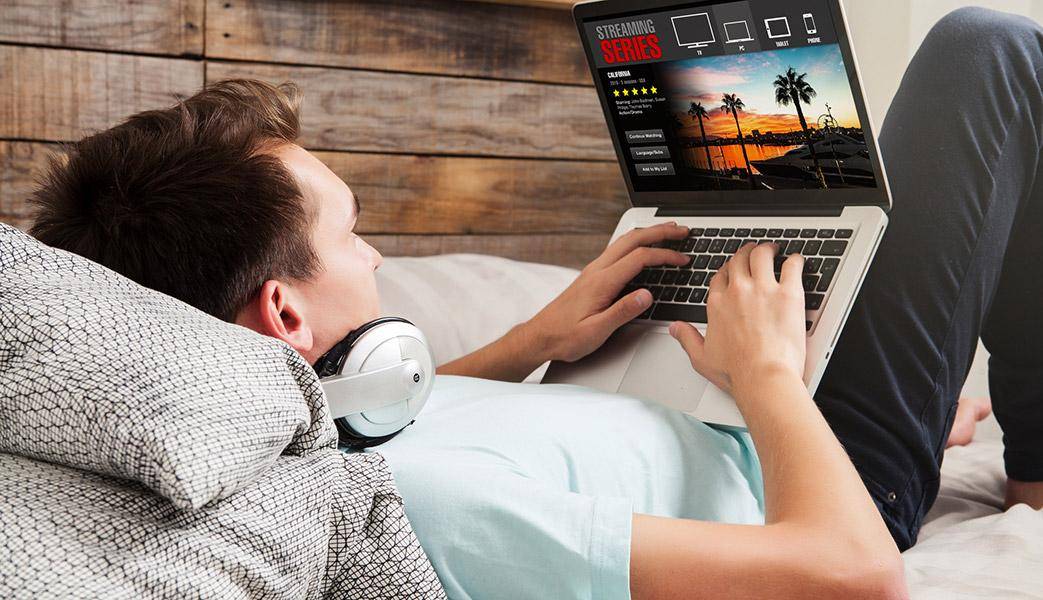 The streaming chain begins with your screen: how is it connecting to the internet? Is it connecting over wi-fi? If so, does your device run on the latest wireless ac band? And if so, do your modem and/or router even support that standard? How many other devices are connecting to that modem at the same time you are watching streaming TV?

These questions are worth considering.

If you have multiple devices connecting through an older modem concurrently, you may be creating a congestion issue before you’ve even begun reaching out across the Internet for content.

Remember, if you put premium fuel into a Kia, and place it on a fresh new highway, it’s not about to drive like a Ferrari. Ensuring your technology for connecting to the internet is modern and up to spec is a key part of streaming performance.

For help working out if your router is too old, read this guide.

nbn is not a direct provider of internet to consumers; nbn is a wholesaler. It sells bandwidth on its network to retail service providers (RSPs) who then present that to consumers in packages as they see fit.

The place where the nbn™ network is delivered and then divvied up to the RSP is called the point of interconnect. If the amount of bandwidth an RSP owns in your local area is exceeded by the amount of customers it has in that area, it could create congestion.

Aside from purely buying more capacity on the nbn™ network, RSPs can also improve the experience of the viewer by pushing content closer to them – this means the content travels a shorter distance so is less prone to encountering problems.

This is called building a Content Delivery Network (CDN) and telcos can either build their own or use a private provider like Akamai or Limelight – or sometimes they can do both.

The location of your CDN

CDNs are not limited to RSPs. They are also employed by streaming services and other platforms that frequently receive information requests.

Content delivery networks are a global network of ‘proxy servers’ that are physically held in various data centres, ideally closer to global visitors than the original server.

When referring to CDNs, these proxy servers are also called ‘edge servers’ or ‘edge nodes’, so-named because they’re at the edge of the network that’s closest to the user.

By using these edge servers, the idea is for users around the world to experience better performance because they are geographically closer to the content or web page they are trying to access.

Netflix, Stan, YouTube, Amazon Prime and the like have impressive CDNs. These companies host their content on a server, and it’s from here that it is streamed to you, the consumer.

The content needs to travel from that server to your home, and the further that distance, the harder it has to work and the more issues can get in the way.

Most of the big streaming providers have established local servers in Australia to minimise this distance to ensure they’re feeding their content straight onto the local internet infrastructure.

However, some smaller providers cannot afford this. They end up hosting the content on servers outside of Australia. Not only does this create a longer distance for the stream to travel – which can produce lag – but the end user has no idea what RSP or type of internet infrastructure the offshore CDN must travel through before it even reaches the nbn™ network, and then makes its way to the screen at its destination.

The quality of the server itself also matters, and again the bigger, more-established streaming companies generally have the resources to deliver more in this regard.

A server can only handle so many requests at once. The better the server, the more requests it can handle, and the more concurrent streams it can generate. A larger service may have powerful servers, allowing for a good experience across a huge number of concurrent users. A smaller company may not have this resource available.

Ultimately, the streaming process can be complex, and the nbn™ network is just one link in the chain that your entertainment travels down.

At-home network technology and setup, the RSP, and the streaming service itself, among other factors, also play a big role in end user experience when streaming video.

If you'd like to keep the shows rolling, you also can check out how much data your video, movie and TV streaming services use here.