The nbn™ project | Published on 23 December 2019
Share on Twitter Share on Facebook Share on LinkedIn
7-minute read
In this summer blog series, we’re taking a closer look at how smart devices are changing the way Australians live, work, and connect. Next up is productivity.

No matter how much or how little we do in a day, the seconds, minutes and hours are ticking by at the same speed for all of us.

The good news is though, connectivity – like services over the nbn™ broadband access network – is helping to boost productivity and win back time.

While connected devices have been around for decades, the scene has gone through explosive growth in recent years.

It’s anticipated that, by 2021, the average Australian home will have 30.7 connected devices, more than double the growth compared to the estimated 13.7 devices of 2017. Already, as technology analyst firm Telsyte has revealed, the local smart device industry is worth $1.1 billion.

But for smart devices to properly help with productivity, they really need access to high-speed broadband.

After all, if the average 2021 home has 30 devices that are all online trying to download and upload information simultaneously – with some using cloud-based artificial intelligence (AI) or machine learning – that’s some serious network demand.*

Thankfully, fast broadband is here already, unlocking the Internet of Things (IoT) and laying the last brick in the journey towards a smart home (or even a smart farm).

Now that we’re approaching the completion of the volume rollout of the nbn™ access network,^ the other piece of the puzzle is already available to millions of Australians, and is drawing closer to being available to all eligible premises.

Whether you’re already connected or it’s still in your future, here’s a breakdown of some of the smart devices that can help you get more done in less time.

At the centre of any drive for improved productivity is the smart speaker or more powerful smart hub. You may think these devices aren’t much to look at – but their potential is phenomenal.

Using broadband, smart speakers connect to virtual assistants through voice commands, while smart hubs connect all your smart devices through one controller.

There are some notable leaders in this space.

The Amazon Echo Plus offers three features in one device. It’s a smart speaker/hub hybrid that connects and controls a tonne of devices in your home, but it also responds to relevant voice commands – like, “What’s the weather like today?” – using virtual assistant Alexa. It helps that it’s also a decent speaker for answering questions or playing your favourite tunes. 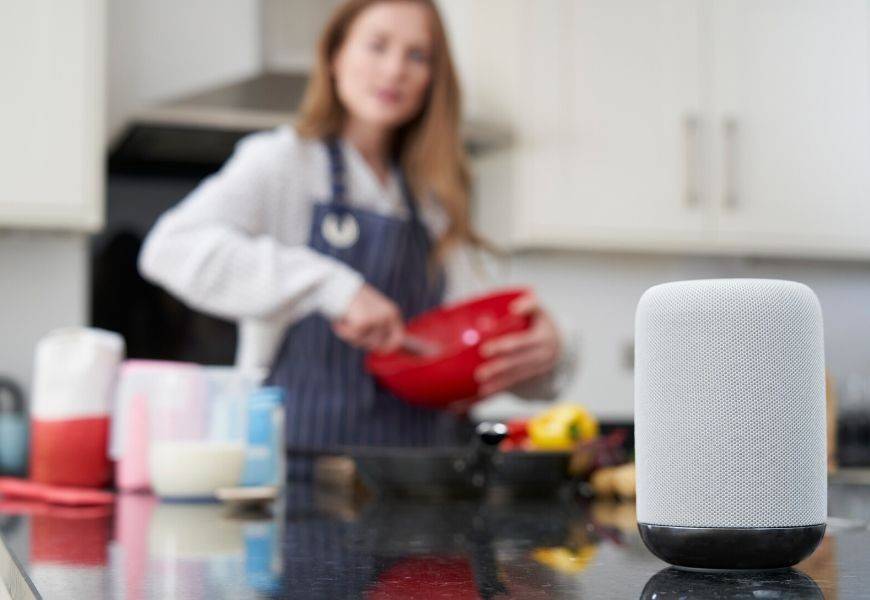 A likeminded product with very similar capabilities is Google Home. This smart speaker/hub hybrid has its own virtual assistant, which taps into the considerable processing power and machine learning capabilities of Google. For a more comprehensive hub, Google Nest Hub is designed to control the many potential smart devices of a connected home, offers personalised schedules, provides hands-free audio/video assistance, and even acts as a digital photo frame.

The Logitech Harmony Home Hub takes another approach. It’s a simpler smart hub in what it can do, but it allows you to connect to it through a smartphone app. This gives you control of many devices in a much faster way, as well as control over everyday connected functions, saving the time needed to juggle between the increasing stack of remotes for individual gizmos.

The internet-connected mobile phone may have been with us for a while, but as fast broadband has spread across the land and mobile phones have evolved into smartphones, these everyday gadgets have become powerful productivity tools.

The addition of virtual assistants, apps that interconnect devices, better machine learning in key features like maps, improved videoconferencing, and more services that utilise the cloud to store and distribute data have all been driving the smartphone to new levels of intelligence.

One of the more recent high-profile releases was the iPhone 11, which brought with it an improved virtual assistant (Siri), longer battery life, a faster processor and incredible video. In short, it means you can have a longer-lasting virtual assistant in your pocket that’s capable of taking advantage of the connectivity perks of local Wi-Fi, which is particularly useful for backing up the big-data results of an incredible camera.

For those who prefer Android, Samsung also released the Galaxy Note10+ earlier in 2019. It comes close to matching the iPhone 11 for sheer performance, but also adds S Pen functionality, which lets you convert onscreen handwriting into digital text. Doodlers also use the S Pen to create basic or in-depth digital drawings, and it can even be used to navigate presentations.

Likewise, the Google Pixel 4 raised eyebrows with its deeper integration of Google Assistant for better voice control and improved machine learning. In terms of voice control, the Pixel 4 does a great job of transcribing voice into text, which means you can speak to jot down ideas when you’re on the go.

Coffee is an essential start to a lot of people’s day, getting caffeinators moving on those sluggish mornings, or offering a later-day pick-me-up. But instead of brewing the old-fashioned way, today’s coffee machine can be smart enough to brew your caffeine dose before you’re in the room. 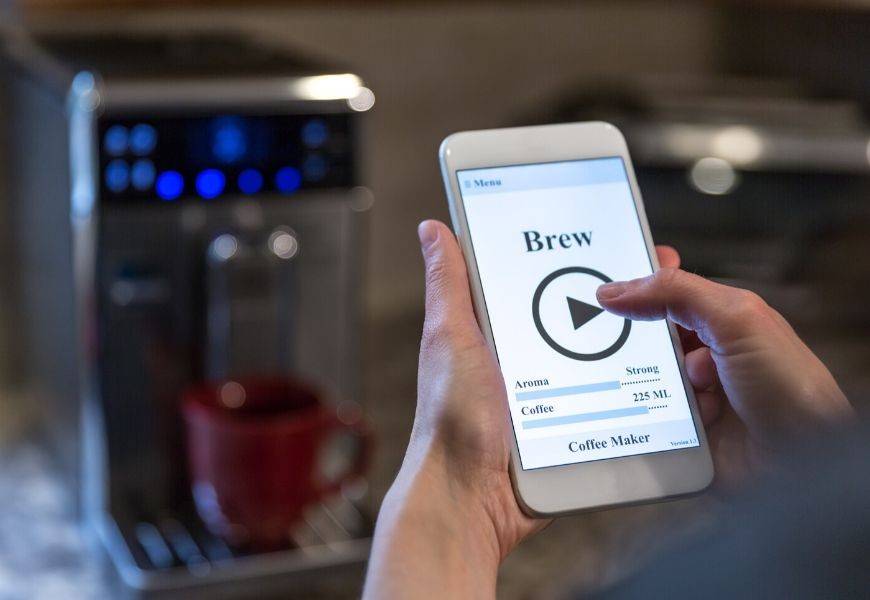 Not only does it integrate with smart hubs so you can simply ask for a coffee and get it, but you can control it remotely via smartphone app. You can even set it to brew a coffee, from bean to cup, when you wake up in the morning, or for that essential afternoon boost.

Other devices in this space are catching up in terms of smart-hub integration but can still deliver great results on demand through your smartphone with affordable options like the Behmor Brewer. It strips back the features of more expensive digital baristas, but still delivers with remote and on-demand tasty brews.

Time on your side

A good smart watch does more than just tell you the time and how much exercise you’ve done. It should also improve productivity by giving you access to key messages and emails, tap-payment functionality, as well as notifications and phone calls.

All of that from your wrist.

Not only does this ensure at-a-glance updates and timely responses, it also leads to quicker operation when connected to a smartphone.

If you have an iPhone, the Apple Watch Series 5 is designed with the iOS ecosystem in mind. It boasts stacks of integrated apps, water resistance for outdoor use, Apple Pay support, Siri integration and plenty more.

For more flexibility, the Samsung Galaxy Watch pairs with a range of Android smartphones and iPhones. It offers impressive battery life of up to four days, as well as a sharp display and the option to make calls directly from the watch. There is also the Fossil Gen 5, which integrates with Google’s operating system, including Google Assistant, GPS and convenient tap-to-pay Near Field Communication support.

The humble pen proves itself even mightier than before with an intelligence boost.

A smart pen allows you to write or draw anything and have it simultaneously record a digital version on a compatible device.

Unlike devices, such as the aforementioned S Pen, that are bound to specific companion gadgets, smart pens are more intended for those who still prefer to handwrite or draw but want to eliminate the double-handling of digitising afterwards. 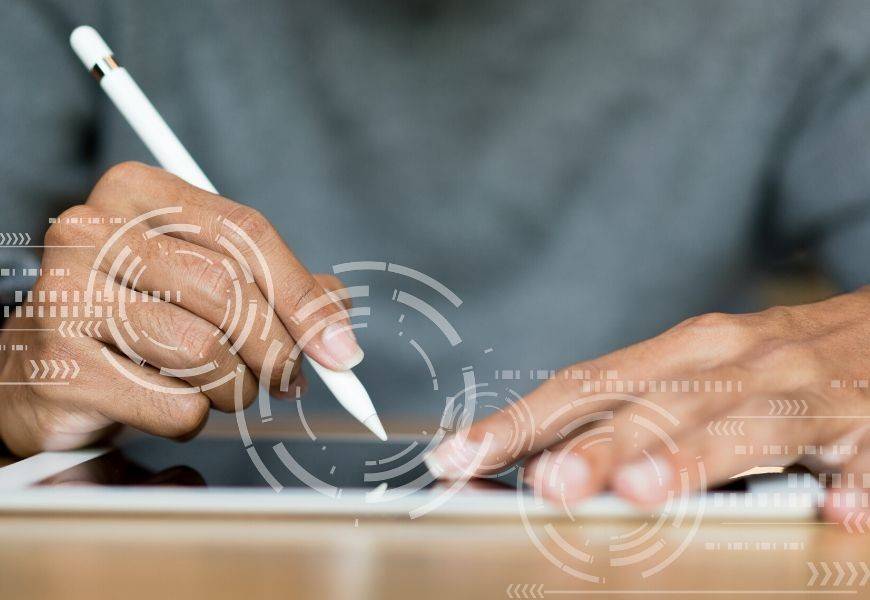 The Neo smartpen M1 is a notable entry in this space. Not only does it do an excellent job of inking on paper and digitising doodles, it also has integrated support for popular cloud-based note organisers like Evernote, OneNote and Google Drive.

With so many smart devices built to help make you more productive, more and more Australians are enjoying the benefits of services over to the nbn™ access network.

How to optimise your experience at home

Make the most of your internet connection with these tips for your in-home set-up.
Read the next blog in the series: Smartening up the everyday items at home.

* An end user’s experience, including the speeds actually achieved over the nbn™ broadband access network, depends on the nbn™ access network technology and configuration over which services are delivered to their premises, whether they are using the internet during the busy period (typically, 7pm to 11pm), and some factors outside of NBN Co’s control (like their equipment quality, software, chosen broadband plan, signal reception, or how their provider designs its network). Speeds may also be impacted by the number of concurrent users on the Fixed Wireless network, particularly during busy periods. Sky Muster™ satellite users may experience latency.